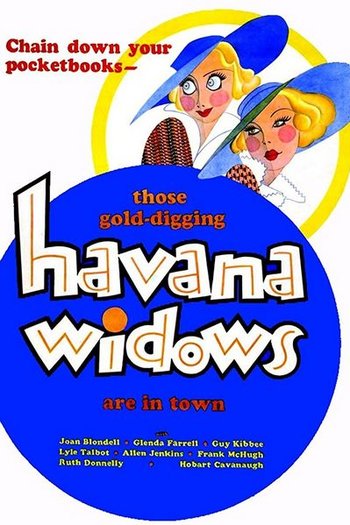 Sadie and Mae (Farrell and Blondell) are roommates and dancers in a burlesque show. They aren't doing very well; Sadie is fined $5 (a quarter of what she earns per performance) for scratching her back during a show, and Mae is suspended without pay for a week when she refuses to be a stripper at a stag party.

The ladies are casting about for a way to pay their back rent when they are visited by Gloria, a former acquaintance from burlesque. Gloria has struck it rich. How did she strike it rich? By going to Havana, Cuba and luring a rich married man into a marriage proposal, and then suing him for breach of promise. Gloria recommends her friend Duffy, a Havana lawyer who helped her with her scheme. After Sadie and Mae trick one of Mae's admirers, a Mook named Howard, into lending them $1500 that they will use to pretend to be rich widows, they are off to pre-revolutionary Cuba.

Sadie and Mae go to Havana and are unpleasantly surprised to find that Duffy is literally drunk all the time. But they find a target of opportunity when dim-witted horse breeder Deacon Jones (Guy Kibbee) blunders into their room by mistake and goes to sleep. However, their plot is complicated when Mae falls in love with Deacon's handsome son, Bob (Lyle Talbot).