Recap / Star Trek: The Next Generation S3E11 "The Hunted" 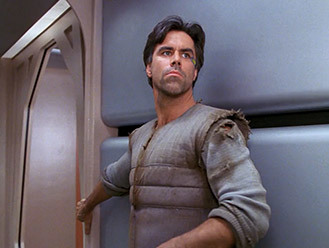 This is Roga Danar. He's a total badass, and he's not happy about it.
" 'A matter of internal security.' The age-old cry of the oppressor."
— Captain Jean-Luc Picard
Advertisement:

The Enterprise and crew are visiting Angosia, a Proud Scholar Race that is applying for entry into The Federation. Picard and Riker are praising Angosia's society for its rapid recovery from a recent war when the Angosian authorities request some assistance. A prisoner has escaped from a penal colony on the moon of Lunar V, and they need the Enterprise's help in apprehending him.

After a quick bit of searching, the Enterprise locates his stolen shuttle but have difficulty apprehending it. Using a series of clever misdirections, the ship nearly eludes the Enterprise, but Data eventually manages to locate an Escape Pod that contains no signs of life. Picard tells O'Brien to beam over anything humanoid-sized within the pod that might be the convict. It works, and the convict is brought on board.

The convict refuses to surrender and puts a serious beating on two security guards and O'Brien at the same time, shaking off phaser blasts all the while. Riker and Worf finally arrive as reinforcements and manage to subdue the convict. Strangely enough, the convict continues to show no life signs on the ship's sensors.

The mysterious prisoner is identified as Roga Danar. Troi senses him having nightmares and goes to his holding cell to meet him. She notices that for such a violent man, he is intelligent and thoughtful while displaying no signs of uncontrollable anger. He admits that he has been augmented to serve as a Super Soldier, giving him an enhanced capacity for violence and the mental conditioning to use it when threatened.

With a little research into the Angosian files, Troi and Data find something odd. Roga has no criminal record whatsoever, and his military record is an exemplary one at that. And as it happens, Lunar V is a military prison where all of the soldiers from its previous war were dumped because they had become unfit to live in society anymore. They all can't turn off their military conditioning to react violently to any perceived threat.

Angosia arranges for Roga to be transported back to Lunar V and tells the Enterprise to keep their noses out of their internal security matters. In spite of his distaste over Roga's treatment at the hands of his own government, Picard's hands are bound because he has no authority over Angosia.

When the Enterprise attempts to beam Roga to the Angosian shuttle, Roga does the impossible. He breaks out of the transport beam and begins running amok on the Enterprise. Still unable to locate him with the ship's sensors, the bridge can only track his interactions with the ship, creating a cat-and-mouse game between him and Worf's security team. Roga leads them on a merry chase, using misdirection to consistently flummox the crew and keep his plans a mystery. Worf finally gets the drop on him, but Roga outfights him and beams himself aboard the prison transport ship.

Roga commandeers the transport vessel and steers it to Lunar V to round up his former comrades and lead an insurrection on Angosia. The government pleads with Picard to help defend them from the threat of their own making. Picard beams down personally along with only Troi, Data, and Worf just in time for Roga's commandos to storm the capital building. Picard warns the Angosians not to provoke the commandos in any way to avoid triggering their military conditioning and starting a bloodbath. He then urges the two sides to talk to each other.

The two sides seem intractable. The soldiers insist on returning to their home, while the Angosian government maintains that nothing can be done to make them suitable for society again. The away team chastise the government for never even trying to help the soldiers who protected them. Picard refuses to interfere in the negotiations, saying that they will have to find a solution together. The away team then beams away, leaving Angosia to its fate, after telling the Angosians when they are truly ready the Federation would be happy to reconsider their application.

Back on the ship, Picard prepares to leave the planet telling Riker to note in their report that if the Angosian government survives the night the Federation would offer assistance in treating their veterans. He expresses confidence that Angosia will find a way to survive, before having helm set a course for a nearby starbase.