Recap / Star Trek: The Next Generation S3E12 "The High Ground" 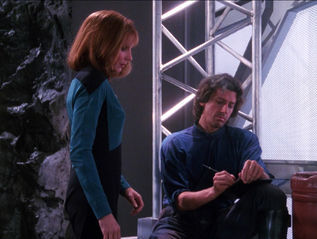 "I am willing to die for my freedom, Doctor. And in the finest tradition of your own great civilization, I'm willing to kill for it, too."
Advertisement:

The Enterprise has made a stop at Rutia IV, a non-aligned world that nonetheless maintains an active trade relationship with the Federation. The crew is on alert due to the ongoing terrorist activity of Ansatan separatists in the area they're in. Doctor Crusher is just about to leave the cafe she's dining at when an explosion injures several nearby civilians. In spite of the danger, Crusher insists on staying to help the wounded. Suddenly, a terrorist appears and kidnaps her.

The crew can't locate where the terrorist took Crusher because he was using some unknown technology to teleport. They immediately set to work analyzing the information they have to locate her. Meanwhile, Riker works with Devos, the leader of the Rutian security forces, to question local Ansatans in hopes of getting a lead.

Crusher has been taken to the Ansatan separatists' underground hideout, where their leader Kyril Finn tells her that they need her medical skills. Many of the terrorists are dying because their DNA has been warped. The Ansatans' use of an Inverter to jump through dimensions to teleport without a trace is slowly killing them, but it is a sacrifice they're willing to make for their cause. Though Crusher scorns his tactics, Finn argues that he's using the only means he has at his disposal to achieve freedom. Finn proves to be a talented artist and begins sketching Crusher in his off time.

The Ansatans plan to further exploit the Enterprise's presence by blowing it up. Terrorists use their Inverter to teleport through the ship's shields and plant an explosive device on the engine, but La Forge manages to give the transporter room a signal just in time to beam it off of the ship before it explodes. However, a second wave of terrorists invade the bridge and abduct Picard himself.

Picard refuses to cooperate with Finn, and when Crusher defends Finn's actions, he accuses her of suffering from Stockholm Syndrome. However, she shows him Finn's drawings and suspects that Finn has developed a connection to her as well. When Finn arrives, he continues to defend his tactics against Picard's criticism and argues that because the Federation trades with the Ansatans, they are supporting a despotic regime while pretending to stay neutral. By antagonizing the Federation, he wants to force them into abandoning their neutrality and help broker a deal between the Ansatans and Rutians.

When Finn teleports onto the Enterprise again to deliver his demands for Picard's return, Wesley finally manages to lock onto the Inverter's location. Riker, Worf and a team of Rutian soldiers infiltrate the Ansatan terrorist base and seize control. Finn runs to his captives and points a weapon at Picard, but he hesitates just long enough for Devos to shoot him in the back, killing him. One final terrorist, a young boy, points his own weapon at Picard, but Crusher manages to talk him into surrendering. The conflict is at an end, and the crew hope that one boy dropping his weapon may be the first step toward peace on the planet.

Finn justifies his terrorism by comparing himself to George Washington

Example of:
Your Terrorists Are Our Freedom Fighters

Finn justifies his terrorism by comparing himself to George Washington