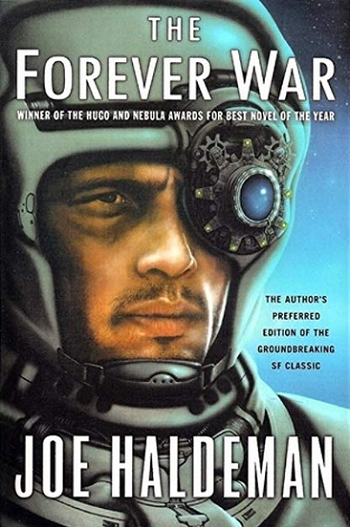 The Forever War is a science fiction war novel by American author Joe Haldeman. Considered one of the classics of Military Science Fiction, alongside Robert A. Heinlein's Starship Troopers, the book is a post-modern, post-Vietnam take on the standard sci-fi war novel and as some critics note, a philosophical rebuttal/Deconstruction of Heinlein's work (though it's worth noting that Heinlein himself praised it). The book won the Nebula Award in 1975 and the Hugo and Locus awards in 1976 for Best Novel.
Advertisement:

Haldeman, after graduating with a degree in Astronomy, was drafted into the U.S. Army and served as a combat engineer in Vietnam, where he was wounded. His experiences — the terror of combat, the inhuman randomness of government bureaucracy, the sense of coming back to an unrecognizable world, and the futility of the war — are all reflected in the novel. In a re-publication in the 1990s, Haldeman, in a foreword, stated that writing this book was his primary therapy to cope with the after effects of the Vietnam War.

The story is told from the point of view of William Mandella, a recent college graduate with a physics degree who is drafted into the United Nations Expeditionary Force (UNEF) and sent out to fight the enigmatic Taurans, who have been destroying human ships and colonies. The grueling training and enemy attacks are bad enough, but the worst part is the effect of Time Dilation caused by repeated travel at relativistic speeds, which causes the world around Mandella to age and change into something unrecognizable. Mandella's only remaining connection to his old life is his fellow soldier Marygay Potter, and the two must fight a hostile species to save a world that has been lost to them.

The direct sequel, Forever Free, came out in 1999.

There are two different versions of the middle section of the novel (Mandella's first return to Earth). When the two short stories that make up the beginning and end of the novel were to be collected he wrote a story to tie them together. He wrote a second version of the middle story after the first he submitted to his editors was regarded as too bleak. The author has said he prefers the original, more downbeat version, and more recent printings have the original version.