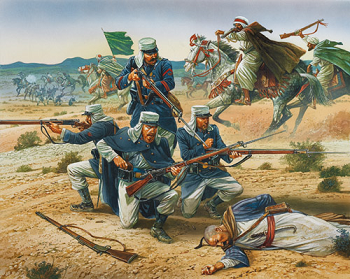 "You are part of the Legion to die and the Legion will send you somewhere you can die."
"Marche ou crève." translation  "March or die."
— Unofficial motto of the French Foreign Legion
Advertisement:

is one of the most mythologized military units in the world. Its most famous writer was P.C. Wren, but it has had other writers and it has been occasionally spoofed, notably by Charles Schulz. It is legendary as a place where people with a Mysterious Past go to disappear, and of course bereaved lovers, political refugees, and various rogues and scoundrels and the like can always be found there.

The actual Legion existed to provide a body of Cannon Fodder who could fight in dangerous and distant lands without risking the lives of too many actual French citizens, though in recent years it took the role of a far smaller, elite infantry unit, complemented by a light armor regiment. French citizenship is often the reward for a Legionnaire who has completed five years of service or been wounded in action (the latter option being known as becoming Français par le sang versé—"French by spilled blood").

The stereotypical Legionnaire in fiction is represented as a member of a North African campaign in the first half of the twentieth century. They are always depicted wearing white khepis while standing guard at lonely outposts in the Sahara. In real life, the Legion operates in a variety of environments and conflicts (such as French Indochina) and wears camouflage as needed. One of their real-life current deployments is to serve as the security detail for the European Space Agency's space launch facility at Kourou, French Guiana (the European Union's counterpart to Cape Canaveral).

For more details about La Grande Muette, go to Gauls With Grenades, or Cheese-Eating Surrender Monkeys.