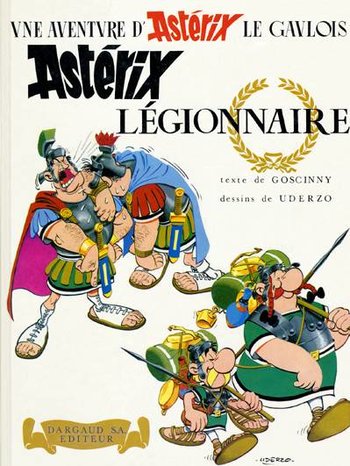 The tenth Asterix volume presents the military careers of the unlikeliest soldiers in the whole Roman army: Asterix and Obelix!

As Asterix and Obelix set out on a boar hunt, Obelix is distracted by fellow villager Soporofix's lovely daughter Panacea, who has just returned from studying in Condatum (called Rennes today), and the menhir deliveryman walks straight into a tree (to Dogmatix's dismay and Getafix's anger, the druid having been in the tree cutting mistletoe). When the duo return from the hunt, Obelix gets distracted by Panacea again, and only ends up eating two boars with Asterix before losing his appetite. Alarmed at his friend's change in demeanour, Asterix fetches the druid, and they pass Panacea on their way back... followed by Obelix, delivering a menhir he doesn't have. Getafix thinks he knows why Obelix is acting strangely, and when he calls Panacea back and (re)introduces her to our heroes, his suspicions are confirmed: Obelix is head over heels in love with Panacea! (Dogmatix doesn't approve.)

Asterix suggests that Obelix act on his crush, so he goes into the nearby forest to pick some flowers (and beat up a Roman patrol) to give to her. Asterix is about to leave his friend alone with Panacea when Postaldistrix the postman (seen in the previous album) delivers a message revealing that Panacea's fiancé, Tragicomix, has been conscripted into the Roman army and posted to Africa. Obelix contains his heartbreak over discovering that Panacea already has a fiancé for just long enough to volunteer to bring him back, and Asterix volunteers to help. Vitalstatistix explains to them that their old friend Julius Caesar is fighting troops loyal to his political rival Pompey the Great near Ruspina (the Roman name for the Tunisian city of Monastir) and needs all the volunteers he can get - and if he can't get volunteers, he'll take draftees instead. Obelix leaves Dogmatix with Panacea until he and Asterix return - and one kiss from his master's crush, and Dogmatix is smitten too...

The two Gauls hurry to Condatum, hoping to rescue Tragicomix before he is posted, but upon arriving at the local army headquarters (and being given the runaround by the various departments when trying to get information), Asterix is informed that Tragicomix is already in Massilia (Marseilles) and will be shipping out to Africa any day. The only way to get him back is to enlist, so the two Armoricans join Neveratalos the Greek, Selectivemploymentax the Briton, Gastronomix the Belgian, Hemispheric and Allegoric the Goths (at least until the latter is rejected for being too skinny), and Ptenisnet the Egyptian (who thinks the headquarters is a hotel for tourists on a package holiday) in signing on for a tour of duty with the 1st Legion, 3rd Cohort, 2nd Maniple, 1st Century.

Medical inspection and kit distribution do not quite go off without a hitch, while Neveratalos starts an argument with the recruiting officer, Nefarius Purpus, over their meagre wages (two and a half sestertii per day), so that by the time the new recruits meet their drill instructor, Dubius Status, Purpus is reduced to tears... and Status follows in short order after the cookhouse trumpet sounds before he can get any training done. The new recruits (bar Selectivemploymentax) are disgusted by the terrible food, and one visit to the kitchen later, the Gauls have "persuaded" the cook to serve proper, if very unmilitary, meals. Dubius Status' mood deteriorates further when he tries and fails to drill the Gauls in military discipline and fighting skills, and even further the next day when our heroes lose patience with a route march with backpacks full of rocks and, one belt of magic potion for Asterix later, decide to carry their fellow recruits' packs while the other recruits carry their hapless DI.

Upon returning from the shambolic route march, the recruits are informed by Purpus that they are setting out for Massilia at once, to be posted to Africa. Seizing their chance to catch up with Tragicomix, Asterix and Obelix insist on marching straight through the day without stopping (to their officers' shock), and the next day they and their fellow recruits even change back into civilian clothes, so that by the time they reach Massilia, the two centurions are unshaven nervous wrecks. Asterix and Obelix's haste continues when they board a galley and insist on overriding the captain's orders by going full steam ahead to Africa (pausing for just long enough to sink the ship of Redbeard and his pirate crew, who previously thought a Roman galley easy pickings).

At Caesar's camp near Thapsus, the unmilitary behaviour of the new recruits continues as, one by one, they wander into Caesar's tent (Ptenisnet in search of activities; Gastronomix, Selectivemploymentax, and Hemispheric in search of beer; Asterix and Obelix in search of Tragicomix) as he plans strategy for a battle against Pompey's ally, Metellus Scipio. The two Gauls meet an older legionary who, in exchange for a drink, tells them that Tragicomix had only just arrived in Africa when he was lost in a fight with Scipio's forces; fortunately, the spy Vitriolix, who has just been on a reconaissance mission for Caesar, tells them that Tragicomix was taken prisoner rather than killed, and is being kept in Scipio's camp to the north.

Asterix and Obelix break out of their camp, and Caesar, convinced that the duo are spies planning to report back to Scipio, sends a patrol after them... and when said patrol hears the two Gauls fighting one of Scipio's patrols, they are convinced their opposite numbers are attacking, and Caesar rouses his armies to head into battle. The two Gauls smash their way into Scipio's camp, and when the lookout sees Caesar's armies right behind them, Scipio's forces head out to meet them. With the camp deserted, the two Armoricans are able to free Tragicomix from the prisoner's enclosure and return to Caesar's camp; as for the battle, since both armies are in the same uniform, there is so much confusion as to who is on which side that Scipio surrenders in disgust. The three Gauls change back into civilian clothes and run into Caesar on their way out of the camp again; grateful for their contribution to his victory over Scipio, the Roman leader gives the trio honourable discharges, and as their erstwhile comrades-in-arms bid them farewell, even Nefarius Purpus thanks Asterix and Obelix for their (inadvertent) aid.

The three Gauls board the same galley they took from Massilia (stopping to sink Redbeard's ship again on the way back) and return to their village, where the lovers are reunited. Before leaving to get married in Condatum, Panacea gives Asterix and Obelix a kiss of thanks. And while Obelix returns to normal, his good attitude and appetite restored, now it is Asterix's turn to be lovestruck, and he spends the banquet sitting in a daze in the branches of a tree.