Only One Who Likes Spam 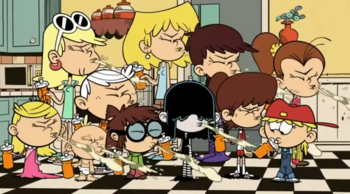 Onion infused water: Kid-tested, Lana-approved.
Wakko: Please, sir, can I have seconds?
Brain: Seconds!? Wait. You actually like this fetid calorie paste, urchin?
Wakko: I love it! This is a guy who eats a dump truck full of garbage in the intro, so maybe take my opinion with a grain of salt.
— Animaniacs (2020)
Advertisement:

They say there's no accounting for taste. A Trademark Favorite Food for one person can be the least appetizing thing in the world for another. However, there are foods so disgusting and borderline inedible that almost nobody likes them. Keyword being "Almost".

They are the Only One Who Likes Spam. The ones with such... unique palates that they're able to consume, and even enjoy, food (often a Stock "Yuck!" or Foreign Queasine type) that everyone else finds disgusting. The food this character likes that everyone else hates may even be their Trademark Favorite Food.

This kind of character is often a Big Eater who isn't very picky, and often enjoys food from a Cordon Bleugh Chef, or is even able to stomach food of a Lethal Chef. See also Does Not Like Spam, Extreme Omnivore and Bizarre Taste in Food. Compare Only One Finds It Fun, which is this trope applied to an activity rather than a food.