Recap / Asterix and the Chieftain's Shield 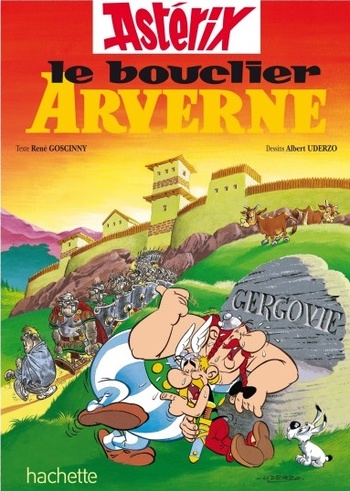 The eleventh Asterix book opens with a scene last depicted in Asterix the Gaul: following the siege of Alesia, the defeated Gaulish chieftain Vercingetorix throws his arms down at (or rather, on) Caesar's feet, and Gaul is officially conquered. Caesar (hopping on one foot) sets off in search of other conquests, leaving Vercingetorix's arms lying where he threw them... until that evening, when a Roman archer steals the chieftain's shield - which he immediately loses to another legionary in a game of chance. The other legionary is caught by a centurion, and as he is out of his camp at night without a pass, the centurion confiscates the shield in return for his silence. As the pictures on the page grow smaller and smaller, we see the centurion swap the shield for an amphora of wine at an inn, and then the proprietor gives the shield to a warrior drowning his sorrows after the defeat at Alesia...

...Jump to the present, where Chief Vitalstatistix is suffering (and his wife, Impedimenta, is unsympathetic). Too much wine and fine food is giving him liver trouble. Getafix prescribes treatment from a Hydro (health spa) in Aqua Calidae (present day Vichy) in the region of Arvernia (today called Auvergne). With Asterix, Obelix, and Dogmatix accompanying, the Chief leaves, sampling fine food from various inns along the way and making his liver trouble worse. At the Hydro, Vitalstatistix begins his treatment (which includes drinking water from the spa at regular intervals, the "sophisticated" shower system - a man throwing a bucket of water - and a diet of boiled vegetables)... but as Asterix and Obelix are not at the spa for health reasons, they can eat and drink what they like, and when they have driven the other patients to the brink of insanity, they are firmly asked to leave. The chief promises to meet them at Gergovia, site of a Gaulish victory over Caesar's legions,note  The precise site of the battle is debated, but the village of Merdogne near the Gergovie plateau, considered the official site of the battle, was re-named Gergovie as a tribute to the battle in 1865 after a successful petition to Emperor Napoleon III. after he is cured.

In the forests near Gergovia, the Gauls bump into Roman tribune Noxius Vapus, and thump him accordingly. Arvernian wine and coal merchant Winesanspirix is on a walk in the forest at the time, and is happy to show Vapus' conquerors around Gergovia. In Rome, Vapus reports his thumping to Julius Caesar, who decides to put the Gauls in their place by holding a triumph in the city where he was previously defeated, standing on Vercingetorix's shield - but the shield is missing. Caesar puts Vapus on the trail, telling him to start his search in Gergovia, where many survivors from Alesia settled in. Upon his return, he receives another thumping from Asterix and Obelix, although Winesanspirix is concerned to hear that the tribune is back, as it means Caesar has plans in the region.

Vapus enlists the local legions, but their search of the local wine and coal merchants turns up empty, so the incredibly lazy legionary Caius Pusillanimus is selected to go undercover, as he's so foolish that no one will take him for a spy. Unfortunately, he's also overly fond of wine, and he goes straight to Winesanspirix's inn, gets blind drunk, and reveals both that Caesar wants to be carried on Vercingetorix's shield for a triumph in the city and that he knows what happened to the shield immediately after the battle (a fact he hasn't thought to share with his superiors) - it was stolen by the archer Lucius Circumbendibus, who now owns a wheel factory in Nemessos (Clermont-Ferrand today).

Asterix, Obelix, and Dogmatix go to Circumbendibus's factory, where the Roman tells them the name of the other legionary who won the shield from him in a game of chance: Marcus Carniverus, now working as an attendant in a Hydro at Borvo (called La Bourboule now). As the Gauls book into the Hydro (to Obelix's great reluctance), Circumbendibus sends an anonymous tip to Vapus that the Gauls are looking for the shield; as it turns out, Carniverus saved up his wages at the Hydro and opened his own inn, the Boar in Wine (a revelation that Obelix doesn't take well), and the delay means that the Romans get there ahead of the two Gauls and their dog. After they bash in the patrol sent to arrest them, Carniverus tells them what he has just told the patrol: the centurion who confiscated the shield from him for being out without a pass is named Titus Crapulus, who is still in the army.

Upon returning to Gergovia, Asterix and Obelix discover that Vapus's search has intensified, and, worse, Winesanspirix has disappeared, with his wife fearing the worst. The two Armoricans vow to break into the local garrison HQ to rescue him. Their arrival coincides with that of Titus Crapulus, whom Vapus has tracked down through the army lists; his alcoholism has stalled his military career, but Vapus offers to wipe the slate clean if he can tell him what he did with the shield. Unfortunately, Crapulus cannot remember the name of the merchant to whom he gave the shield in exchange for an amphora of wine... until Asterix and Obelix forcibly enter the room and announce they're looking for Winesanspirix. Crapulus is ecstatic: that was the name of the merchant! Vapus' reaction to this news - demanding that Winesanspirix be found - reveals to Asterix and Obelix that the Arvernian isn't a Roman prisoner after all, and they leave, but in so doing, they reveal their names to Vapus, who recognises them as the two men also trying to find Vercingetorix' shield. They simply punch him out of the way when he tries to stop them from leaving, and he rushes off with a patrol after Crapulus establishes which way the two Armoricans went, leaving the centurion on his own. The bewildered Crapulus asks the first legionary he sees, Pusillanimus, to lead him to the nearest inn, and they go off to get drunk together.

Asterix and Obelix return to Winesanspirix's inn to find that the proprietor has returned, although they must first hide from Vapus and his patrol as they search the coal cellar. After the Romans leave, Winesanspirix confesses that when he knew how important it was for the Gauls to find the shield, he ran away in shame, as after Crapulus gave him the shield, he gave it away to a warrior from another part of Gaul who was drowning his sorrows after the battle of Alesia, and he can't remember the warrior's name. All he remembers is that he was thin and miserable and...

The man entering the inn whom Winesanspirix has just recognised is none other than Vitalstatistix! The weight he has lost as part of his treatment means he is now about the same size (and in the same emotional state) as he was after Alesia, and he confirms that when he went to drown his sorrows after Alesia, he persuaded the innkeeper to give him the chieftain's shield... which he still has, as it's the shield on which he is carried around every day back home! This gives Asterix an idea, and he asks Winesanspirix to summon the people of Gergovia.

Meanwhile, Vapus and his legionaries prepare to sack Gergovia when they meet up with first Asterix, then Caesar, who wants to know how the search is going. Asterix is especially delighted to see the head Roman himself, as he can witness the triumph they have organised, with Obelix parading Vitalstatistix, the last Gaulish chief to stand against Caesar, on the shield of Vercingetorix. Knowing that he has to keep this humiliation secret, Caesar has Vapus and his troops sent to a garrison in Numidia, and when the thoroughly drunk - but clean from having not been searching coal cellars - Crapulus and Pusillanimus stagger past, Caesar promotes Pusillanimus to centurion and Crapulus to CO of the entire Gergovia garrison. Crapulus says it'll be easy for them to keep the peace, as they're already friends with all of the local wine merchants.

Our heroes return to their village in triumph, and Vitalstatistix samples fine food from the various inns along the way, restoring his original bulk by the end of their journey. On his return, the village holds another one of their feasts, but someone is missing. Cacofonix? No, he's enjoying this one. The missing person is Vitalstatistix, who's being shown the offensive qualities of the shield from Impedimenta...