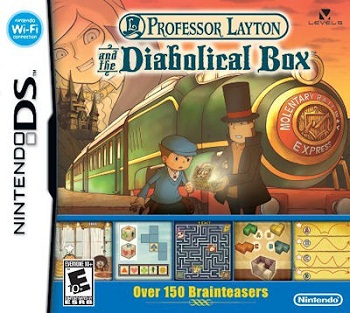 The second game in the Professor Layton Widget Series.

In Professor Layton and the Diabolical Box (Pandora's Box in PAL regions), Layton receives a letter from his mentor, Dr Schrader, in which Schrader says that he had acquired the legendary Elysian Box that is said to kill all who open it. Though Layton gets a bad feeling and rushes to his mentor's aid, Schrader is already dead and the box is missing. The only clue is a ticket for the mysterious Molentary Express, so Layton and Luke decide to take a trip with no known destination.