Anime / Ghost in the Shell: Arise 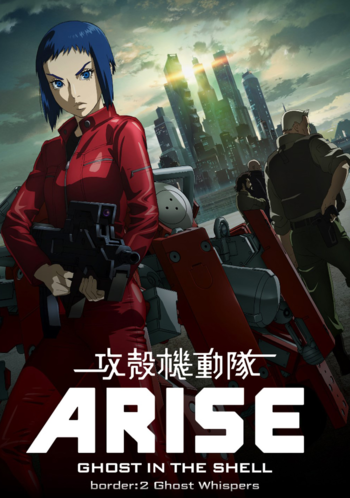 Ghost in the Shell: Arise is an OVA consisting of four 50-minute episodes. Kazichiki Kase — the Key Animator for the good majority of Production I.G's works, including the original movies and Ghost in the Shell: Stand Alone Complex — serves as director, while Tow Ubukata — of Fafner in the Azure: Dead Aggressor and Mardock Scramble fame — serves as scriptwriter; Stand-Alone Complex mastermind Kenji Kamiyama confirmed that he has no involvement in this project. Shirow Masamune himself approved and helped flesh out the initial concept.
Advertisement:

The first installment, Ghost Pain (released on 22 June 2013), starts in 2027, one year after the end of the fourth non-nuclear world war. 501st Secret Unit agent Motoko Kusanagi looks into the death of her mentor, Lt.Col. Mamuro, after accusations arise of his involvement in arms dealing. During her investigation, Motoko meets Public Security Section 9 chief Daisuke Aramaki and JGSDF Ranger Batou, the latter of which suspects Kusanagi of having a bigger role in the case than she lets on. Unbeknownst to Kusanagi, the Secret Unit's head, Kurutsu, and the unit's elite cyborg agents have placed her under surveillance.

The second installment, Ghost Whispers (released on 25 November 2013), takes place after Kusanagi leaves the 501st Secret Unit and forms her own team. When someone hacks into the Logicoma, Motoko supervises a transport of the machines for an abnormality scan; along the way, an armed unit attacks the transport and specifically targets Motoko. Not long after the attack, Motoko meets up with Batou, Ishikawa (an Army hacker and a longtime Batou's associate), and Borma (an electronic warfare expert), and recruits them into Section 9.

The third installment, Ghost Tears (released 28 June 2014), follows Section 9's investigation on the terrorist organization, whose symbol is the Scylla, an ancient sea-monster. Meanwhile, Togusa investigates a murder of a man who possessed a prosthetic leg manufactured by the Mermaid's Leg corporation. His findings are connected to Motoko and Section 9's case and it all leads to someone who is in a relationship with Motoko.

The fourth and final installment, Ghost Stands Alone (released 6 Sept 2014) takes place in the winter of 2028. Tensions are rising in New Port City as demonstrations are held concerning the interests of foreign cartels. This leads to a shooting incident involving riot police. It all started with a cyberbrain infection released by the terrorist "Fire Starter." Section 9 entrusts the suppression of the situation. As they investigate further, the group discovers a deeper revelation regarding the terrorist.

A manga adaptation of Arise released simultaneously with each OVA episode. In the Spring 2015 Anime season, a 10-episode TV series called Ghost in the Shell: Arise - Alternative Architecture aired. Alternative Architecture is the original 4 OVA episodes split up into two episodes each for TV broadcast; the final two episodes are a new arc called Pyrophoric Cult, which concluded the Fire-Starter Myth Arc.

The Arise continuity was concluded with the release of Ghost in the Shell: The New Movie on June 20, 2015.

An anime VR movie known as Ghost In The Shell Virtual Reality Diver was released in English and Japanese in July 13, 2018 for Apple and Android smartphones.

Funimation licensed the show for release in North America; initially releasing a Limited Edition subtitled Blu-Ray. The dub of Episode 1 and 2 was released in October 2014. Episodes 3 and 4 followed suit in October 2015, and Ghost in the Shell: The New Movie was released in April of 2016.

Ghost in the Shell: Arise contains examples of the following tropes: