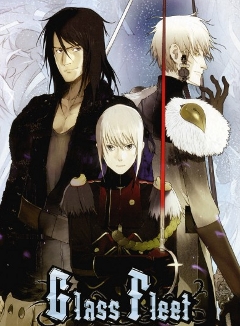 A crossdresser, a sarcastic space pirate, and a madman emperor all walk into a bar... sounds like the beginning of a joke, no?

Glass Fleet is a 26 episode anime series that is essentially the French Revolution IN SPACE!.

It follows the story of Michel Volban, the leader of the People's Army which plots to overthrow the tyrannical rule of the Holy Emperor Vetti Sforza. To do this, Michel attempts to enlist the help of Cleo, the captain of a very rare and very powerful Glass Battleship. The problem? Cleo has no interest in politics, despite the fact that he's apparently going to someday take over the universe with his ship.

Still, Cleo eventually decides to join sides with Michel against Vetti, but that's where things start getting tricky.