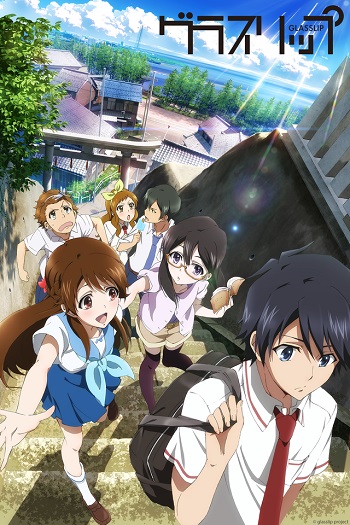 Characters, from foreground to back, Kakeru Okikura, Tōko Fukami, Sachi Nagamiya, and in the back, from left to right, Hiro Shirosaki, Yanagi Takayama and Yukinari Imi.
Advertisement:

Glasslip is a thirteen-episode anime that began airing in July 2014; it is produced by P. A. Works and directed by Junji Nishimura, and is centered on Tōko Fukami, whose family runs a glass shop in a coastal town. Tōko enjoys relaxing with her friends at the Kazemichi café. During the summer break before their final year at high school, Tōko encounters Kakeru Okikura, a transfer student who claims that voices help him glimpse into the future, which led him to find Tōko and torches off a summer of both hope and heartache.

The anime is available at Crunchyroll

, and manga and light novel adaptations debuted in July and October 2014, respectively.