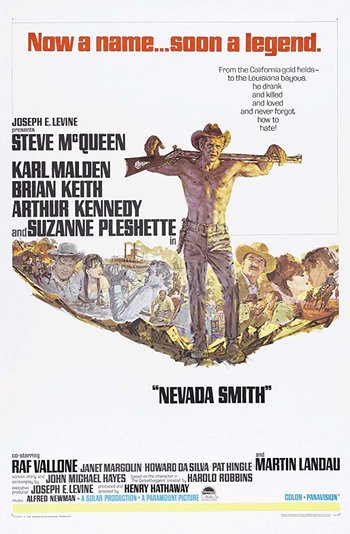 Nevada Smith is a 1966 American Western film directed by Henry Hathaway and starring Steve McQueen. The movie was a prequel to the novel The Carpetbaggers by Harold Robbins, which had been made into a film earlier that featured McQueen's character as an older man, but besides that and Nevada Smith depicting Smith's first meeting with another Carpetbaggers character, Jonas Cord Sr., the two films' stories are otherwise unrelated. The cast is rounded out by Karl Malden, Brian Keith, Arthur Kennedy, Suzanne Pleshette, and Martin Landau.

In the West of the 1890s, a trio of outlaws robs, tortures and brutally kills the white father and Indian mother of young Max Sand (McQueen). He later sets out to avenge their deaths, assuming the name "Nevada Smith".