Film / Terror in a Texas Town 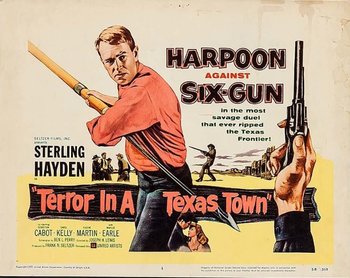 Terror in a Texas Town is a 1958 American Western film directed by Joseph Lewis and starring Sterling Hayden.

George Hanson is an honest, hardworking whaler, who returns to his Texas hometown after 20 years at sea. Hearing the tragic news of his father's death two days earlier, George finds little support from the local sheriff. Investigating on his own, George uncovers an evil conspiracy that involves McNeil, an oil speculator, who had his father killed over a land sale gone wrong.

Probably the only Western to feature a Showdown at High Noon between a six gun and a harpoon.

Tropes used in Terror in a Texas Town include: