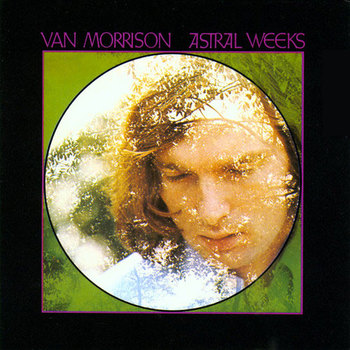 "And I will never grow so old again..."
Advertisement:

Astral Weeks is the second studio album by Northern Irish singer-songwriter Van Morrison. Recorded in 1968, it follows on from the Early-Installment Weirdness debut solo album Blowin' Your Mind, and represents Morrison's first bout of relative creative freedom after breaking with Bert Berns. The eight tracks were recorded in September-October 1968, using a backing band of notable Jazz musicians like guitarist Jay Berliner, bassist Richard Davis, and drummer Connie Kay. It was released in November of that year.

It's a loose Concept Album, dealing with themes of love, growing up and loss, all done within an obvious autobiographical framework (for example, "Cyprus Avenue" is about an actual street in Belfast).

Astral Weeks sold poorly when it was first released, but according to music historian Andrew Ford, "Astral Weeks will sell as many copies this year as it did in 1968 and has every year in between."

Part One: In the Beginning

If I ventured through the Trope-Stream...