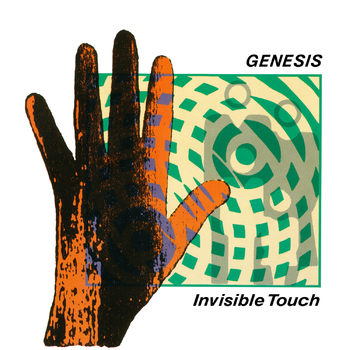 She seems to have an invisible touch, yeah
It takes control, and slowly tears you apart
"The ultimate Genesis album."
—Tagline from the album's advertising campaign.
Advertisement:

Invisible Touch is the thirteenth studio album by British progressive-turned-pop rock band Genesis. It was released through Atlantic Records on 6 June 1986 in the United States, and through Virgin Records (via the Charisma label) on 9 March 1986 in the United Kingdom.

Following the band's self-titled twelfth album in 1983, the members—Phil Collins, Tony Banks, and Mike Rutherford—had taken some time to work on solo projects. Collins released and toured for his third solo album No Jacket Required (marking a shift from the progressive pop of his first two albums to mainstream pop rock), did a song for the film Against All Odds, and appeared at both the American and British wings of Live Aid. Banks produced the soundtrack for the sci-fi film Lorca and the Outlaws (and was briefly connected to 2010 and The Terminator). And Rutherford created his own side band, Mike + the Mechanics, getting several hits off their self-titled debut album. The band came back together in late 1985 to create a new album with producer Hugh Padgham, bringing together everything they'd developed on their solo projects and gearing it for Genesis.

Five singles were released: the Title Track, "Throwing It All Away", "In Too Deep", "Land of Confusion", and "Tonight, Tonight, Tonight". All five were top 10 on both the Billboard Hot 100 and the Cashbox Top 100; "Invisible Touch" would become their only #1 single in the United States. The album is also noted for the music video for "Land of Confusion" by the folks at Spitting Image, which was a hit on MTV and has its own page on this very wiki thanks to just how dense with material it is; tropes relevant to the song and its music video go there.

The band took a world tour to promote the album, performing 112 concerts over 59 different stops from September 1986 to July 1987. The tour was so popular, that after initially resorting to multiple concerts at many stops (a total of nine in Sydney), the second half of the tour began playing almost exclusively at large football stadiums. The music video for "Throwing It All Away" uses footage from the first two stops of the tour at Detroit and Toronto. Selections from the tour would be featured on the 1992 live album The Way We Walk, Volume One: The Shorts, alongside cuts from the then-ongoing We Can't Dance tour.

"I watch these tropes go round and round, and see mine turning upside-down":