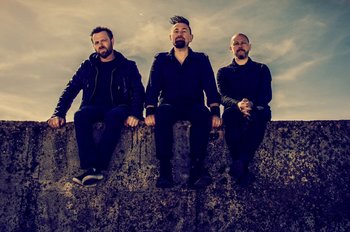 Therapy? are an alternative metal band from Northern Ireland, currently consisting of vocalist/guitarist Andy Cairns, bassist Michael McKeegan, and drummer Neil Cooper. Therapy? was formed in 1989 by Cairns and drummer-vocalist Fyfe Ewing. To complete the lineup, the band recruited McKeegan, who was Ewing's classmate.

Their most famous era was undeniably the mid-90's, where they had several UK Top 40 Singles, most notably "Screamager", and released Troublegum in 1994, which has sold over two million records and is often considered one of the landmark rock 90's albums in the UK. However, it was followed by Infernal Love, which was a dark and experimental record (unlike its poppier predecessor), and the latters critical and commercial failure pretty much killed any commercial aspirations created by Troublegum.

Starting with Ewing's departure shortly after its release, the band entered its Dork Age, with several member changes and badly received albums, along with many label problems (which eventually contributed to their records not even making it into the US market). However, the lineup stabilized in the early/mid-00's with the addition of Cooper, and they have since released several well-reviewed records and maintain a small but strong following throughout Europe.

I got nothing to do, but hang around and get some tropes for you: