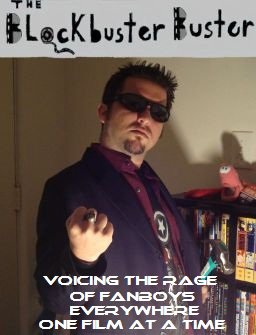 One busted and thousands more to go.
"In a World… of uncertainty, when movie theaters are plagued with remakes and sequels. In a world where big budget movies can still suck. In this world, we have The Blockbuster Buster."
Advertisement:

Eric "ERod" Rodriguez hosts a Video Review Show which involves him as a renegade film critic "busting" bad big budget Hollywood films, including disappointing entries into popular film franchises, remakes of classic movies, and film adaptations. He has his own site here

He can be supported by fans on his Patreon.

He used to contribute to Space Monkey Mafia Studios and was featured on Channel Awesome from 2011 to 2018.

Character traits have been moved to the Characters Page.