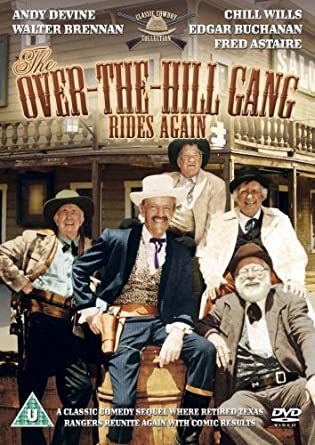 The Over-the-Hill Gang Rides Again starring Walter Brennan and Fred Astaire is a 1970 ABC Movie of the Week sequel to the Western comedy The Over-the-Hill Gang. The supporting cast includes Edgar Buchanan, Andy Devine, Chill Wills, Lana Wood, and Burt Mustin (all of whom, except Wood, were in The Over-the-Hill Gang). Like the 1969 original, the sequel involves a group of aging Texas Rangers and was written by Richard Carr and directed by George McCowan.

Four retired Texas Rangers — Nash Crawford (Brennan), Jason Fitch (Buchanan), Amos Polk (Devine), and Gentleman George Agnew (Wills) — leap to the aid of their old chum the Baltimore Kid (Astaire). The Kid has become a hopeless drunk, and they aim to clean him up and install him as marshal of Waco, Texas. But in order to complete the job, the geriatric quartet will have to help the Kid defeat the outlaw gang that wants him dead.