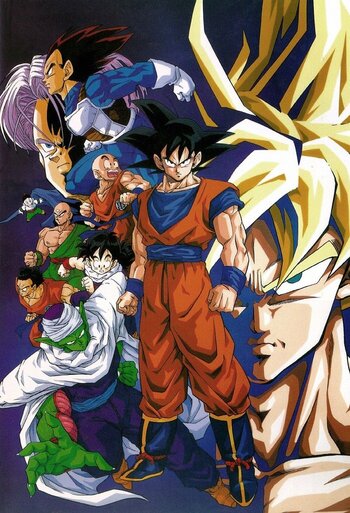 (For the proper reading experience, run the music from here,

if you're really hardcore) while reading this page.)

Dragon Ball Z is Toei's anime adaptation of the latter two thirds of Akira Toriyama's Dragon Ball manga, originally broadcast from 1989 to 1996. While the manga kept its original name throughout its run everywhere in the world (except in English), the anime's title was changed from Dragon Ball to Dragon Ball Z, which Toriyama suggested because he felt he would be ending the story soon, with the last letter of the Latin alphabet meaning to indicate this. While Z is often considered a separate anime from the preceding one, in reality it's more of a marketing rebrand, since the production team was almost identical and it aired on the same schedule without missing a beat. However Z represents Dragon Ball at its most popular, and so is often treated as its own entire sub-franchise due to the overall obscurity of the first third of the story (in America, ViZ branded all the manga volumes adapted by this anime with the Dragon Ball Z name).

While the original anime started out as a Supernatural Martial Arts comedy series inspired by Journey to the West, by the Demon King Piccolo Arc it had become more serious and featured violent and sometimes bloody battles, and this continued throughout Z (with the partial exception of the Buu Arc). And since Z is easily one of, if not the most popular anime of all time, for better or worse it's become associated with every anime stereotype in the west - absurd levels of screaming, constant Serial Escalation, Beam-O-War battles and a whole lot of standing around doing nothing are all prominent tropes in this series that have practically become synonymous with anime as a whole (at least, when they're not referencing Pokémon or hentai).

The anime is also notorious for running up against the manga at essentially all times by the second arc. This forced Toei Animation to create loads and loads of Filler in an effort to allow the manga to forge ahead. At best, this allowed for zany, ridiculous episodes like Goku and Piccolo trying to learn how to drive. At worst, it led to some of the most dragged out fights and storylines in anime history, the absolute low point being when a supposed five-minute countdown for a planet to explode took over ten 26-minute episodesnote the series readily establishes that the "five minutes" thing was a face-saving lie on the part of the villain who revealed it, though that hasn't stopped fans from taking jabs at it.

After defeating Piccolo Jr. and a five year period of peace, it's revealed that Goku was not simply a strange boy with a tail but one of the last of an alien race called the Saiyans, sent into space shortly before the Saiyan planet was destroyed (with shades of Golden Bat, Prince of Gamma,

and Superman). Goku and his friends, reinforced by former enemies (a recurring theme) had to fight progressively more powerful villains. Although Goku and his martial arts skills (which let him and his friends fly, throw energy blasts and read minds) dominated the battles, the story also focuses on his son Gohan as he grew up. Running seven years and nearly 300 episodes, the series can be broken down into the four primary big bads of the series: Vegeta, Frieza, Cell, and Majin Buu. Both Dragon Ball the manga and Dragon Ball Z the anime came to a triumphant conclusion where Gohan's daughter, Pan, enters the "Strongest Under the Heavens" tournament.

Dragon Ball Z was followed by Dragon Ball GT in the same manner as Z did to Dragon Ball* same cast, same crew, same timeslot, no stopping, which was an original story not based on the manga and with minor involvement from Toriyama, which facilitated a lukewarm response.

Easily the most famous dub of Z is by Texas-based Funimation, starting in 1996. Since Texas lacked a voice recording industry they hired actors and writers in Vancouver, Canada, since they were cheaper than L.A.note This cast would be hired by The Ocean Group again to produce their own dub for Canada and Europe after Funimation dropped them, hence why they're often called "the Ocean dub", while TV distribution was handled by Saban Entertainment for syndication. It was incredibly popular right off the bat, however Saban cancelled further distribution in favour of their own productions. After continued success in reruns on Cartoon Network's Toonami block, Funimation dropped the Vancouver cast and set up their own local studio to pick up where they left off with their very first in-house cast, with the show continuing the remainder of its English broadcast run on Toonami. Their dub would eventually complete all Z episodes by 2003 in about the same amount of time as its original run in Japan, and reruns would continue on the block all the way until its initial termination in 2008. Funimation would later go back and redub the portion covered by the Vancouver cast for their own home video releases.

The globally enduring popularity of the series eventually led to Dragon Ball Z Kai in 2009, a more streamlined edit that removed most of the aforementioned filler. Following in the footsteps of the original Z, the English dub and broadcast of Kai quickly became a cornerstone of the revived Toonami, and airings of Funimation's dub of both it and Dragon Ball Super would continue on the network up to the present day.

This sub-series spawned an MMORPG continuation known as Dragon Ball Online for a time, but also spanned fifteen theatrical movies and two TV Specials. The first thirteen movies are Non-Serial Movies that primarily reflected the concurrent story of the show without much regard for how they'd slot into it. The fourteenth movie, Dragon Ball Z: Battle of Gods, made years later under the direct involvement with Toriyama, is a modern continuation of the manga and set some time after the Buu Saga. Dragon Ball Z: Resurrection ‘F’ was a direct sequel, and the wild success of both films led to Dragon Ball Super, a whole new series set between the Buu arc and Z's Distant Finale.

Example of:
From a Single Cell