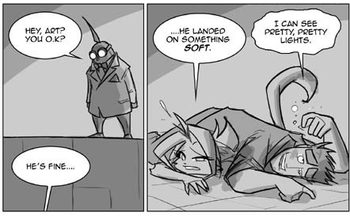 "...nice of you to drop in."
"It's my world, Hobbes! And I'll stand wherever I want! We have an entire planet here, and you're welcome to land anywhere on it but my head! Got it?"
— Calvin, ranting about this trope in Calvin and Hobbes: The Series
Advertisement:

One or more characters fall, usually into a dark hole. One of them calls out that they're OK, because something soft broke their fall. Cue another character answering that they were the "something soft" in question.