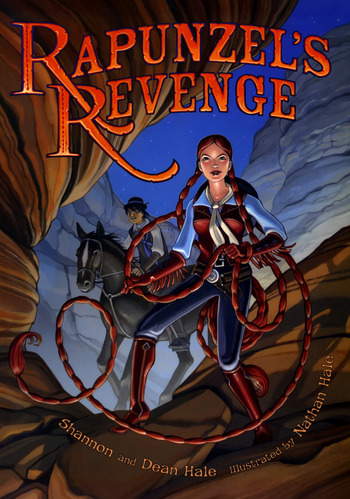 Rapunzel's Revenge is a graphic novel by award-winning author Shannon Hale and husband Dean, illustrated by Nathan Hale (no relation). The story follows a strong and independent Rapunzel, perfectly willing and able to save herself. Initially following the original fairy tale, Rapunzel is kidnapped, but in this tale she escapes herself via her long hair. The rest of the story chronicles her dealing with her pursuers and attempting to escape to freedom.

Followed by Calamity Jack, which focuses on Jack having to face his past as he and Rapunzel travel back east to his hometown of Shyport to help his poor in-debt mother only to find the city ravaged by a race of Ant Men and under the supposed protection of a gang of giants, led by a crime lord named Blunderboar. With the help of one of Jack's old partners, a pixie named Prudence, and inventor/newspaper owner Freddie Sparksmith, they seek to uncover the truth behind the Ant Men attacks and free Jack's mother from Blunderboar's enslavement.