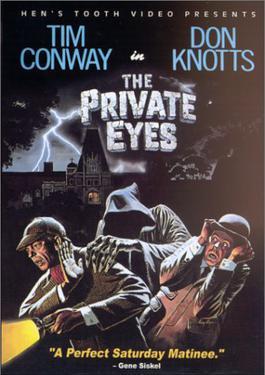 It's safe to say the case isn't in good hands…
Advertisement:

The Private Eyes is a 1980 comedy mystery film set in the early twentieth century. Tim Conway and Don Knotts star as two bumbling American detectives, Inspector Winship (Knotts) and Dr. Tart (Conway), who are assigned to solve the mysterious murder of a Lord and Lady Morley. The two encounter the heiress (Trisha Noble) and a questionable staff.

As the investigation continues, each of the staff is seemingly killed off one-by-one by “The Shadow”, a mysterious figure who one can only assume is the prime suspect.

This was the final pairing for Conway and Knotts and was filmed at Biltmore Estate in Asheville, North Carolina.

Tropes Associated with the Movie