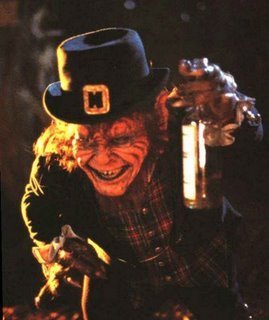 "Try as they will, and try as they might, who steals me gold won't live through the night."
"Your luck just ran out."
— Original poster tagline
Advertisement:

Leprechaun is a 1993 horror-comedy film starring Warwick Davis as the titular character who although not named in the movies is given the off-screen name "Lubdan". A family moves into a rural house and discovers not only a pot of gold, but the rightful owner. The leprechaun will kill any who touches his gold, but has a weakness to wrought iron and four-leaf clovers, which cancel out his magic. Despite negative reviews, the film went on to spawn a franchise, currently consisting of seven films.

In the second film, the leprechaun resurfaces in L.A. and tries to force a woman to be his bride while her boyfriend tries to stop him. In the third film, the title creature is awakened in Las Vegas, and sets out to reclaim his gold. For the third film, new "rules" were added: if you get bitten by a leprechaun, unless you kill them, you will turn into one, and each leprechaun has a "lucky" gold piece, that will grant whoever holds it one wish, even though this isn't part of lore in any way.

The fourth film is creatively titled Leprechaun 4: In Space. In the future, a team of Space Marines are searching for an alien princess, whom the leprechaun intends to make his bride. The more gold a leprechaun has, the more powerful his magic is, and combining her wealth with his own will make him the most powerful being in the galaxy.

Leprechaun in the Hood takes place sometime between the third and fourth films, with the action moved back to L.A. Leprechaun: Back 2 tha Hood is an indirect sequel to the previous film, but recycles the plot of the third film. It was also the last film to star Davis in the title role. The Hood films were the only other entries of the entire franchise besides the original to receive a Tomatometer score higher than 0%.

In 2014, Lionsgate and WWE Films released a Darker and Edgier reboot, Leprechaun: Origins, starring Dylan Postl as the creature. An eighth film, Leprechaun Returns, a Syfy original film and a direct sequel to the original film that takes place 25 years later, was released digitally and on demand in December 2018. Ozzie from the first movie made a return while strong backlash was made out by fans who criticized the absence of Warwick Davis. Davis then revealed that rather than being denied the chance to make a comeback, he chose not to reprise his role as Lubdan for the SyFy reboot because he felt now is not the time to make violent movies while he has children.

Speaking of Syfy, Leprechaun's Revenge, which was originally titled Red Clover, has no relation to the franchise.

I WANT ME TROPES!