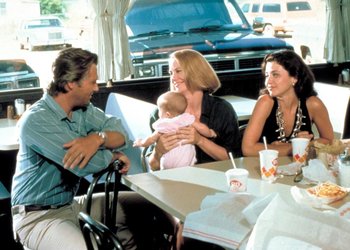 It's 1984. Anarene, Texas is preparing to celebrate its centennial, but the town is much the same as it was in 1952. It's still small, isolated, dependent on the volatile nature of the oil business. And everyone is sleeping with everyone else.

Duane Jackson (Jeff Bridges) is now 50 and owns his own oil drilling company. He lives in a huge house, with a swimming pool, hot tub and two-story backyard doghouse, but is also several million dollars in debt. His marriage to the feisty Karla (Annie Potts) isn't terribly solid. His older children have the same issues with love and sex that Duane and his pals did when they were young. His younger children are prone to mischief. And he's dogged by the usual small town gossip. Even his wife tells him he's suffering from a midlife crisis.

But the town gets shaken up when Jacy Farrow (Cybill Shepherd) returns. After having a minor acting career and living in Europe, she's facing her own midlife crisis. It's only a matter of time before Jacy and Duane re-enter each other's lives, but they're much different people than they were when they were 18.

Shot in color instead of The Last Picture Show's Deliberately Monochrome style, it did get some good reviews. But the long passage of time since the first film and a studio that didn't have much confidence in it meant that Texasville didn't do much business and is now overshadowed by its predecessor.