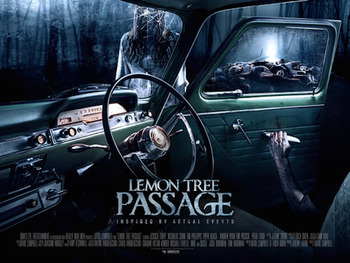 Lemon Tree Passage is a 2014 Australian horror/thriller film that was directed by David James Campbell and is his feature film directorial debut. The film received an Australian release and stars Andrew Ryan, Tim Phillipps, Pippa Black, Jessica Tovey, and Tim Pocock as a group of backpackers that find themselves in the midst of strange occurrences.

A couple of Australians introduce three American backpackers to the local legend of Lemon Tree Passage where a ghost of a motorcyclist warns young drivers to slow down. After seeing the ghost first hand they uncover a malevolent force that possesses the area and threatens to wreak havoc on the final days of their vacation. Isolated and ten thousand miles from home, the tourists find themselves caught in the clutches of an evil force much more heinous than the local myth believed.