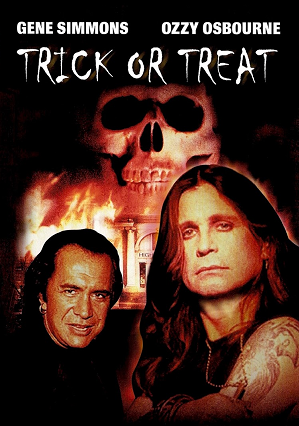 It's a Heavy Metal Horror flick, but unfortunately these two guys are only on screen for about five minutes total (and don't share a scene).
"You should be loyal to your heroes... they can turn on you."
— Sammi Curr
Advertisement:

The plot involves Eddie "Ragman" Weinbauer, a high school outcast and fanboy of devil-worshiping rock & roll icon, Sammi Curr, who died in a hotel fire. Devastated by his hero's death, Eddie receives the only surviving copy of Curr's last and only unreleased album, "Songs in the Key of Death" from "Nuke", a local DJ who knew Sammi personally. Nuke plans to play the album in its entirety on-air at midnight on Halloween as tribute to his dead friend. However, it turns out the tape is possessed by Sammi's ghost, who Eddie makes contact with. Sammi encourages Eddie to get revenge on his bullies at school, but over time murder becomes involved. With the help of his best friend Roger, Eddie plans on ridding himself of the tape and hence Sammi, but Sammi has other plans.

The film was released theatrically in the United States by De Laurentiis Entertainment Group in October 1986.

Not to be confused with 2007 horror film Trick 'r Treat.