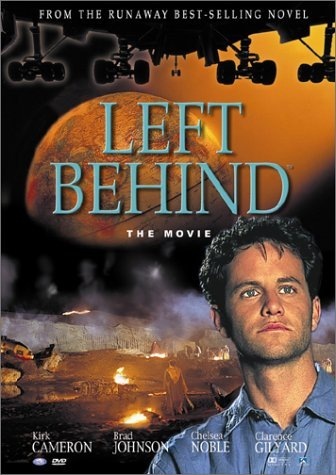 Left Behind: The Movie is a 2000 film based on the first book of the Left Behind series by Tim LaHaye and Jerry B. Jenkins, which was directed by Vic Sarin and produced by Cloud Ten Pictures. It stars the former Growing Pains actor Kirk Cameron in the role of television news anchor Buck Williams as he and airline pilot Rayford Steele witness the Rapture taking place on a flight to London. Shortly after, The Antichrist Nicolae Carpathia appears on the scene to take over the United Nations and reform it into a one-world government, making a deal with Israel that would usher in the seven-year Tribulation period.
Advertisement:

The film took an unorthodox approach of being released on video before it came to the theaters. It was followed by two others in the series, Left Behind II: Tribulation Force (2002) and Left Behind: World At War (2005), both of which are adaptations of the second book.

For the reboot film featuring Nicolas Cage, see Left Behind (2014).