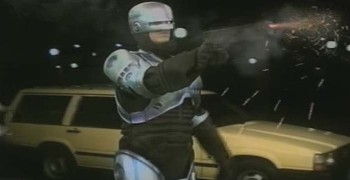 Prime directives: Fuck the public trust. Kill all innocents. Break the law.
"It's a guy, he's about like this? Yeah? He's got a gun? I just saw the guy, he's like over there. I just went that way, I swear to god man, he's got a fucking gun. He just went that way. Honest!"
— The final words of Brandon Lee ever to be put on film. note Technically. The Crow was released in 1994, and this film in 2000. But "Sex, Lies and Video Violence" began shooting in the early 90's, with Brandon's cameo being shot in 1992.
Advertisement:

Sex, Lies and Video Violence (Swedish:Sex, Lögner och Videovåld) is a Swedish film that was shot in the early 90's, but saw only a limited release in 2000. To this day it still has no official release, thanks to major copyright issues.

Turns out, the characters from Mikaels favorite violent flicks, have all gained life and are now trying to invade our world. Well maybe. Mikael may just be utterly batshit insane too.

Sex, Lies and Video Violence is notable for several things. One is the unusual amount of star-studded cameos that a low budget Swedish splatter movie managed to muster. Mel Brooks shows up as a panicking bystander, as do Brandon Lee in what would prove to be his last performance on screen (technically) before his tragic death in 1994. In addition to big name actors, many fictional characters show up as well, including the Teenage Mutant Ninja Turtles and RoboCop. The other one is the very impressive SFX, especially so for a low budget Swedish production.

Highly recommended viewing, although the only way you are ever going to be able to watch it, is through torrents. And we at TV tropes certainly wouldn't want to encourage such immoral and illicit behaviour.

Took it's title from the 1989 Steven Soderbergh film, sex, lies, and videotape.