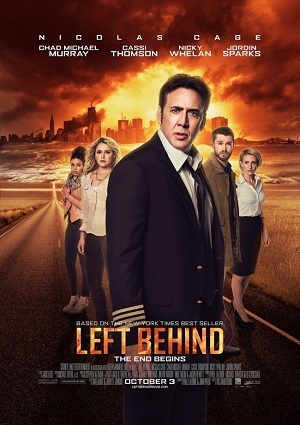 "The God my mother talked about would never do something like this."
—Chloe
Advertisement:

Left Behind is the second attempt at a Film of the Book of the first Left Behind book, covering the first half of the book, loosely. This time, however, it was released to theaters and stars Nicolas Cage. The film was directed by Vic Armstrong and produced by Stoney Lake Entertainment.

Chloe Steele arrives at the airport in time for her Dad's birthday party, and saves a cute reporter from a nutty Christian. It turns out her father, a pilot, got called in to work so they meet at the airport. They see each other and then go their separate ways. Oh, and then people get Caught Up in the Rapture.

A sequel for this movie was in the works, but its crowdfunding was low.

For the film version starring Kirk Cameron, see Left Behind (2000).