Caught Up in the Rapture 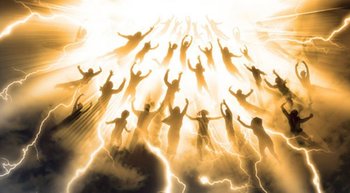 Those who didn't get Left Behind.
"For the Lord Himself will come down from heaven, with a loud command, with the voice of the archangel and with the trumpet call of God, and the dead in Christ will rise first. After that, we who are still alive, who are left, will be caught up together with them in the clouds to meet the Lord in the air. And so we will be with the Lord forever."
— 1 Thessalonians 4:16-17, The Bible
Advertisement:

A standard feature of some Christian eschatology that purports that before (or possibly after) God allows Satan to screw the world over, He will rapture His church, grabbing everyone who is Christian or will be saved and lifting them up into the air before departing to Heaven, while everyone else will be left on Earth to suffer through the End Times.

In reality, while this idea has worked its way into popular consciousness regarding the End of the World, it's actually a fairly recent idea, dating back to a Protestant group called the Plymouth Brethren in the 1830s. A former Anglican minister by the name of John Nelson Darby took a single verse from 1 Thessalonians describing how the church will be "caught up together in the clouds" to join with Jesus. Combining this with Premillenialist theology stating that there will be a period of a great tribulation and hardship on Earth before Jesus comes back to defeat evil for good and reign for 1000 years, Darby is largely responsible for creating the major trappings of the Rapture that people most commonly associate with Christianity today.

Today the Rapture is primarily believed by a very specific type of Evangelical Protestant. Catholics, Orthodox, Anglicans, Lutherans, and many other Protestant groups do not hold with the idea of the Rapture at all.

Curiously, the theology of the Rapture has extended itself out of Christianity entirely. Many New Age gurus who have left Christianity maintain some of the teachings surrounding the rapture, and many of these pseudo-Christian ideas exist in, for instance, Terrance McKenna's Timewave Zero and the various expositions of the end of the age in the Mayan Calendar in December, 2012. (P.S: the last one didn't happen, either. Of course, the world could have ended on December 21st, we've just been caught up in our own affairs so much that we didn't notice.)

The aftermath of the Rapture is often depicted with Empty Piles of Clothing. The time preceding the Rapture may be filled with Signs of the End Times.

The Trope Namer, the song "Caught Up in the Rapture" by Anita Baker, is not about this trope but rather about being deeply in love.