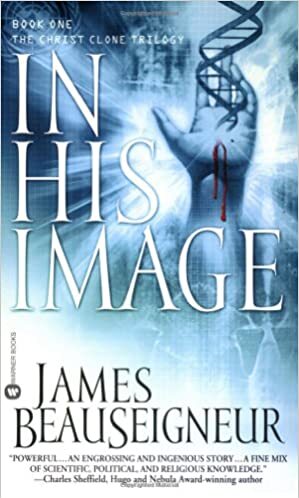 The Christ Clone Trilogy by James BeauSeigneur is a Christian End Times novel series, fictionalizing the story of Bible prophecy being fulfilled 20 Minutes into the Future. As such, it technically qualifies as Science Fiction, but reads more like a technothriller mixed with a Disaster Movie. The overtly supernatural content is introduced gradually from the second book onward.

The story is told primarily from the viewpoint of the journalist Decker Hawthorne, and spans over several decades, beginning with chronicling his work on a scientific expedition to analyze the Shroud of Turin. An old friend of his, Professor Harry Goodman, is a member of the expedition, and later reveals in private that he has found living cells on the Shroud, which he plans to cultivate. Decker, though not particularly religious, is uncomfortable with the implications, and the two don't see each other for another several years. When he later meets the Goodmans' "adopted grand-nephew," Christopher, he can't help but suspect...

Despite his initial unease, Decker quickly comes to think of Christopher as a very nice boy and good person. When the Goodmans die in a car accident, he becomes his legal guardian. But shadowy forces are at work, thinking the boy important to their vision of the world they wish to create. Moreover, as Christopher discovers that he has apparently inherited extraordinary abilities, it becomes clear to all that he has an important part to play in what is to come.