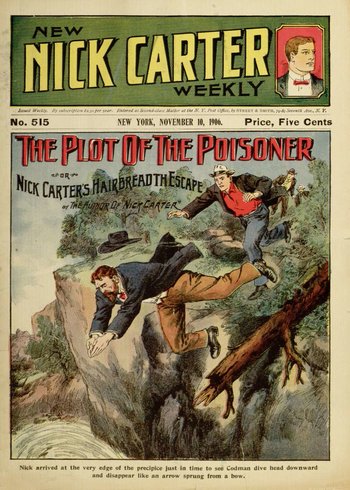 THE Proto-Superhero. A physically powerful but diminutive master sleuth, Nick Carter made his debut in 1886 (Predating Doc Savage by about 40 years). He is kind of a Victorian-era version of Doc Savage (trained by his father to be a superman, dedicated opponent of evil, etc). Phenomenally long-lived, the character has shifted with the times, going from Dime Novel detective and adventurer, to Pulp Magazine detective, to paperback secret agent (Nick Carter, Killmaster, agent for AXE!). This article is about the Dime Novel version of the character.

The Dime Novel Nick Carter was short (5'4) but exceptionally powerful. He is handsome (bronze-skinned, grey-eyed, square-jawed, dark haired). He operates out of Victorian-Edwardian New York (cf. The Gilded Age), but his war against evil takes him to many distant locales. Although he frequently operates alone, Nick does have an assortment of helpers, a kind of precursor to Doc Savage's aides. Some of the most notable are:

And no, he's not one of the Backstreet Boys.

Tropes found in the Nick Carter series include: