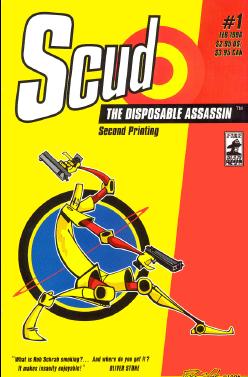 "'Vengeance is mine,' sayeth the Lord. Not anymore! Get your bile piled up, get your spite in a bag... It's the best damn vengeance you've ever had!"
Advertisement:

Scud the Disposable Assassin is a graphic novel series by Rob Schrab, set in a bizarre, hideously amoral world where robotic assassins called Scuds are readily available on every street corner, and dispensed from vending machines. Scuds are deadly, agile, remorseless, heavily armed... and they explode upon terminating their assigned target, so you never have to worry about incriminating evidence.

Our protagonist is just another Scud, hired to clear out a pest control problem, a monstrous creature called Jeff. Realizing that killing Jeff means immediate death for him as well, Scud instead painfully immobilizes Jeff and has her hospitalized. Seeking the necessary cash to keep Jeff's medical bills paid to keep them both alive, Scud now has to go freelance, in a world that seems doomed to eternal peril.

The series originally lasted for 20 issues, published from 1994 to 1998, with the final issue ending in a cliffhanger. Four additional issues appeared in 2008, continuing the original numbering. The #24th issue is so far the finale for the series. There was also a video game released for the Sega Saturn in 1997.