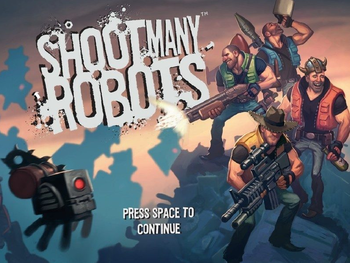 Shoot Many Robots is a Run-and-Gun action game released in March 2012 for Play Station Network, Xbox LIVE Arcade, and a month later for PC (via Steam).
Advertisement:

You (and three of your closest - or not - friends) are P. Walter Tugnut, a gun-loving hillbilly in the midst of a Killer Robot apocalypse. Using whatever weapons he can get his hands on, Walter sets out to destroy the robot horde terrorizing his town.

A sequel, Shoot Many Robots: Arena Kings, spent some time in beta, but was ultimately cancelled.

Tropes used in Shoot Many Robots: