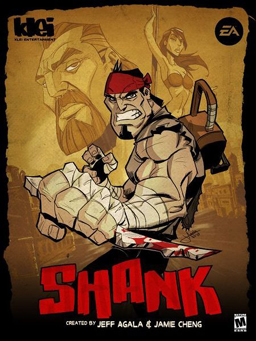 Shank is a 2D Beat 'em Up video game released on the Xbox Live Arcade and PlayStation Network on August 25, 2010, and on PC on October 26 of the same year. It was developed by Klei Entertainment and published by Electronic Arts.

Betrayed by the only family he ever knew and left for dead, Shank feels the need to seek revenge for the death of his beloved at the hands of the underworld's deadliest assassins. Utilizing his knowledge of gang warfare and weaponry, Shank must battle his way through the criminal underground in order to seek revenge against the people who brought his world crashing down around him.

A sequel, Shank 2, was released on February 7, 2012. Shank's attempts to settle down and leave his criminal past behind him are abruptly ended when a power vaccuum was created after Shank destroyed the cartel, forcing a military intervention. Unforunately, this only caused them to take over the operations and create a new crime group called The Militia, ending up threatening the lives of those closest to him. Now, Shank has to once again take up his weapons and take the fight to the enemy, with assistance from the local resistance and an old friend.

Click on the following links for the E3 Animatic

trailers of the first game.

trailers of the sequel.