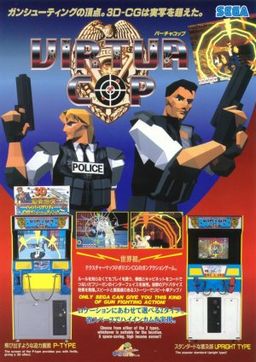 Virtua Cop is a 3D Light Gun Game series created by Yu Suzuki and Sega's AM2 department and initially released in arcades in 1994. The game series revolves around the VCPD Special Investigations Unit and their operatives, Michael Hardy/Rage, James Cools/Smarty and (from the second game onward) Janet Marshall. The core gameplay of all four games in the series is assuming the role of either Rage (first player) or Smarty (second player) and use a light gun (or controller for the console versions) to shoot criminals and advance through the game, with penalties for shooting civilians. There are three missions to choose from, Easy, Medium and Hard, that can be picked in any order. Items like better guns, health packs and even explosive oil drums can be found during the missions.

Has absolutely nothing to do with Virtua Fighter, despite having similar names and both being owned by Sega.