Literature / A Hole in the World 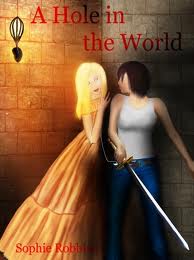 A Hole in the World is a short young-adult fantasy novel by British author Sophie Robbins published in 2011.

Our protagonist, Bianca Western, is a teenager recently come home from a much-loathed stay at a girls' boarding school that ended in arson and expulsion. Reunited with her best friend Scotty and learning to enjoy the company of his friends Cory and Daisy, Bianca finds herself drawn to a mysterious hole in the middle of a stone wall she once entered as a child. Venturing once more into the hole to confront her childhood memories, Bianca finds herself the reluctant rescuer of Princess Alexandra of Calpaea, who is now entirely convinced that Bianca is her Prince Charming.

Basically, it's a traditional fairy-tale about a prince, a princess and a kingdom whose fate will be determined by the power of their love — with a bit of a twist.