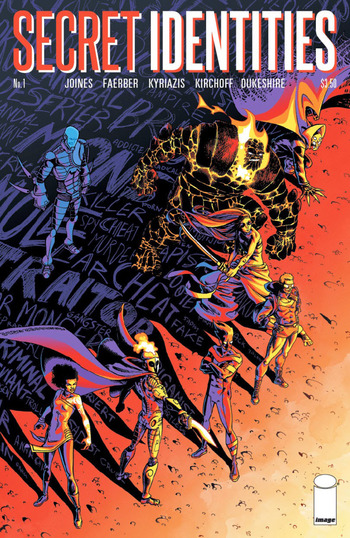 Front Line, in all their glory (Issue #1)
Advertisement:

Secret Identities is a comic written by Brian Joines and Jay Faerber with art by Ilias Kyriazis and published by Image Comics. It was a limited series that ran for seven issues from February to September 2015, with a trade paperback being published the month after its conclusion.

The story focuses on the international (but based out of Toronto) super team Front Line. At the start of the story, the team consists of:

The team has recently lost member Diamond Jim to injury. Thankfully, out of the blue steps a replacement: Crosswind. However, it turns out that Crosswind is working for a secret benefactor to undermine Front Line via blackmail, and it turns out that the members have a lot of skeletons in their closets...

Not to be confused with the common superhero trope Secret Identity.