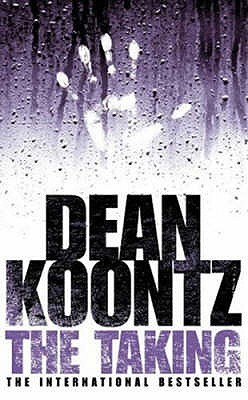 The Taking is a 2004 Horror/suspense novel by Dean Koontz, detailing an invasion by hostile alien forces who bend all that is right with the world in their quick, ruthless takeover, and one couple caught in the middle of it all.

Set in the California mountain town of Black Lake, it begins with Molly Sloan getting out of bed to investigate a strange, sudden rain storm. Her husband Neil slumbers soundly, while she can't sleep.

She finds the rain is faintly luminous, and has a subtle, repulsive scent. Neil wakes screaming from a nightmare, or more of a terrifying awareness of something passing overhead—some massive force like “a mountain coming down.”

News broadcasts tell of strange weather phenomena across the globe, and connections to the outside world begin to be severed as the menacing visitors close in. Molly and Neil leave their isolated home and gather with other townsfolk at the tavern in hopes of finding answers and safety.

A purple fog enshrouds Black Lake. Some stay behind, others plan to fortify and find refuge at the bank, and others want to fight back at what is threatening their world.

Disturbing things happen to undermine the fragile morale of the townsfolk. Molly and Neil leave as disagreement and paranoia and something far worse takes hold of everyone. Braving the horrors outside, they must rely on each other and hidden reserves of strength and humanity they didn't know they had to survive and help those who need it the most; children.

Trying to find reason in the increasingly impossible happenings that seem intent on tearing them apart emotionally as well as physically, they soon find that whatever is taking the earth is changing it in ways profound and unnatural.

Like most of Koontz's stories it works on the premise of genuinely good people cast into horrific situations. The Taking is chock full of Nightmare Fuel, bizarre creatures, T. S. Eliot references, and, despite its Lovecraftian overtones, the notion that no matter what happens, good will prevail and darkness will die.

The Taking provides examples of: