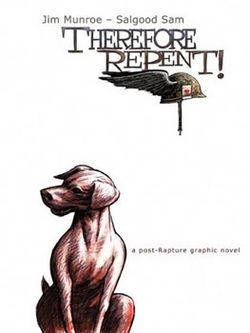 "Therefore Repent! If You Do Not, I Will Come to You Soon and Fight Against Them With the Sword of My Mouth." -Revelation 2:16
Advertisement:

Therefore, Repent! is a post-rapture graphic novel written by Jim Munroe, with art by Salgood Sam. Since the rapture, humans have begun manifesting strange supernatural powers, albeit with some side effects. The main characters are Mummy and Raven, who have just moved to Chicago from Canada and are getting settled in.

In stark contrast to Left Behind, the people trying to get on God's good side believing themselves to be a tribulation force, along with God and the angels, are the villains, who are called "splitters", while the heroes are the "immoral majority", trying to adapt to life without Christians as angels are going around randomly murdering people. Also has a sequel, Sword Of My Mouth.