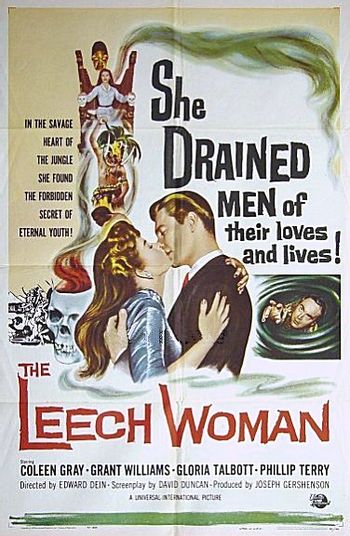 After traveling to Africa, a woman learns the secret of eternal youth - unfortunately, it entails regularly sacrificing young men.

Synopsis (From the MST3k wiki)

Dr. Paul Talbot is trying to find the secret of eternal youth. A 152 year-old African woman, Mala, approaches Paul and offers him her tribe's secret to long life, a special orchid pollen, but he is doubtful until she demonstrates how she has kept herself alive. He tells the secret to his estranged, alcoholic, and aged wife, June, and gets a guide to help them go on an expedition to Mala's village.

During the dangerous journey, June realizes Paul only wants her along to test the potential potion and becomes enraged. June, Paul, and the guide are captured by Mala's tribe and arrive just in time to see Mala undergo a special ceremony, extracting the pineal hormones of a man with a spiked ring, killing him in the process. She then mixes it with the pollen and drinks it to make her young again. Mala makes an offer for June to use the ring; Paul wants to use the opportunity to escape and "get help." However, June turns the tables and chooses Paul as the man she will kill. She undergoes the ceremony, and she and the guide then create a distraction, steal the ring and pollen, and escape. However, as Mala implied, the effect is temporary; June realizes she must keep killing men to keep young and alive, and so kills the guide after they become lost in the jungle.

When she arrives back in the States, Sally, Paul's shrewishly-voiced nurse, is dating Neil, June's wimpish but mildly attractive lawyer. June uses her new youth to pretend to be Terry Hart, her own niece; she constantly hits on Neil and makes Sally utterly jealous. She also goes around town, using her older form, to trick drunks and con men for their sweet, sweet pineal juice. Neil eventually falls in love with Terry, and decides to end it with Sally. Sally confronts Terry and tries to send her to New York via gun; the two fight, and Terry kills her with the ring.

During a romantic evening she has planned with the now free Neil, a detective investigating one of the men she's killed comes to her home and confronts her; he discovers Sally's body in the closet. Crazed, June rants about the formula for youth and tries to prove it using Sally's pineal juice, however June does not stop aging - in fact, she begins to age even more rapidly. Realizing she's lost everything, she throws herself off of her second-story bedroom balcony and reveals her horrible secret in death.

Tropes used in The Leech Woman: