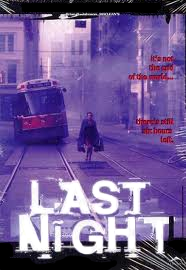 Last Night is a 1998 Canadian comedy-drama directed by Don Mckellar.

The film details how a handful of characters decide to spend the final hours of existence in Toronto. The film won several awards, including Genie Awards for Don Mckellar (Best First-time Canadian Director), Sandra Oh (Best Leading Actress), and Callum Keith Rennie (Best Supporting Actor). The film was also cited by Edgar Wright as one of his influences in making Shaun of the Dead.