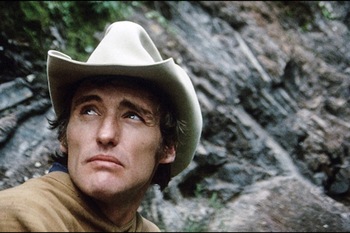 The Last Movie is a 1971 drama film directed by and starring Dennis Hopper, who also co-wrote the story with screenwriter Stewart Stern (Rebel Without a Cause, which Hopper had appeared in).

Kansas (Hopper) is a stunt coordinator in charge of horses on a Western film being shot in a small Peruvian village. Following a tragic incident on the set where an actor is killed in a stunt, he decides to quit the movie business and stay in Peru. His dreams of a paradisiacal existence are interrupted when he is called in to help in a bizarre incident: the Peruvian natives are "filming" their own movie with "cameras" made of sticks, and acting out real Western movie violence, as they don't understand movie fakery.

Hopper's follow-up to Easy Rider, it had an extremely Troubled Production, limited release, and poor critical reception, effectively becoming a Creator Killer for Hopper as a filmmaker, but has more recently been appreciated as a unique New Hollywood artifact and a Cult Classic, particularly after a 4K restoration premiered in 2018.

Not to be confused with The Last Picture Show, which came out the same year and was produced by the company that had produced Easy Rider.