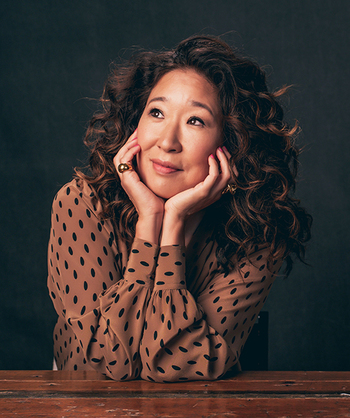 She started out performing at a young age, but as a dancer. An environmental activist and class president in high school, she also took acting classes and performed in improv festivals. She turned down a scholarship to study Journalism at university, instead attending the National Theatre School of Canada and making a deal with her parents that if acting didn't work out she'd go back to school; everyone else in her family has postgraduate degrees. Acting worked out.

Best known for her role as Cristina Yang in Grey's Anatomy, she is also remembered for one of her earliest but greatest roles, as Evelyn Lau in The Diary Of Evelyn Lau and as Jade Li in Double Happiness for which she won a Genie (Canadian Oscar) for Best Actress — she would win the award again four years later for Last Night.

In 2018 she became the first person of Asian descent to be nominated as Best Lead at the Emmy Awards, for her role in Killing Eve, and she took her mom to the ceremony, who wore a traditional Korean hanbok for the first time on American TV.

Filmography with pages on this wiki