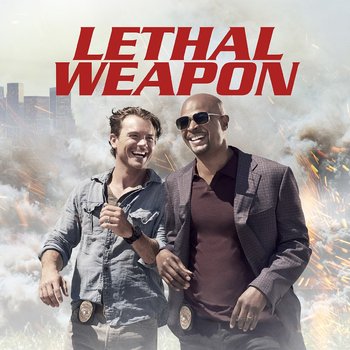 Lethal Weapon is a TV series produced for air on FOX. It is based on the Lethal Weapon film series, and stars Damon Wayans and Clayne Crawford in the roles of Roger Murtaugh and Martin Riggs.

Martin Riggs (Clayne Crawford) is a former Navy SEAL and Sheriff's Deputy in El Paso, Texas, who recently lost his pregnant wife in an auto accident. Reeling from the loss and wanting to die, he moves to Los Angeles and transfers to the LAPD as a detective. There, he's partnered with Roger Murtaugh (Damon Wayans), a seasoned detective who just returned to the job after having suffered a major heart attack. The two immediately clash as one detective's hard-charging manner goes against the other's desire to reduce his stress as much as possible.

The show ran for three seasons. Crawford was fired at the end of the second season, and Seann William Scott was brought in as a new character to be Murtaugh's partner.

This program contains examples of: