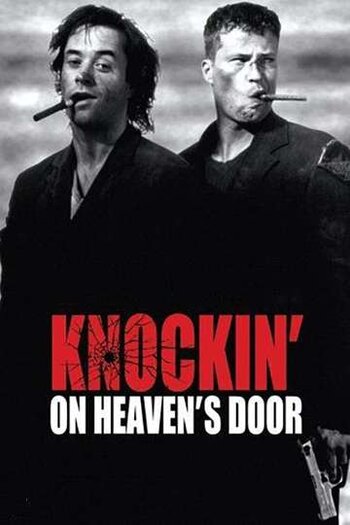 Knockin' on Heaven's Door is a German Buddy Comedy/Road Trip Plot from 1997 about two terminally ill young men, Martin Brest (Til Schweiger) who has just been diagnosed with a big brain tumor and Rudi Wurlitzer (Jan Josef Liefers) who suffers from bone cancer, who meet and decide to have some fun during the last few days they may have to live.

Rudi tells Martin that he has never seen the ocean before, so Martin decides he wants to get his new buddy to the ocean. They steal a Mercedes roadster and escape from the hospital. However, it's two brutal but bumbling gangsters whom they steal the car from, there's a gun in the glove compartment, and in the trunk lies a briefcase with a million Marks inside. Frankie Beluga, the two gangsters' boss, orders them to get the car and the money back. Meanwhile, since they've got nothing to lose anymore anyway, Rudi and Martin start their own criminal career.

The title is of course borrowed from Bob Dylan, but the theme song is a Cover Version by Selig who go by the name DIGITAL ELVIS & ZERO. No relation to Cowboy Bebop: Knockin' on Heaven's Door beyond being named after the same song.