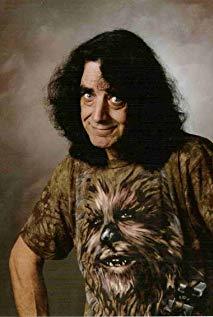 Peter William Mayhew (19 May 1944 - 30 April 2019) was an English actor best known for originating the role of Chewbacca in the Star Wars franchise.

He was 7 feet, 3 inches tall due to being born with Marfan syndrome, which landed him his first film role as the mechanical creature Minaton in Sinbad and the Eye of the Tiger whenever a scene wouldn't work for the creature with Ray Harryhausen's Stop Motion. Mayhew was working as an orderly at King's College Hospital in London when he heard about the casting call at Elstree Studios. He was cast as soon as he stood up to greet George Lucas. Mayhew would go on to play Chewbacca throughout the original trilogy and returned for a cameo in Revenge of the Sith. By the time of The Force Awakens, he was only able to appear in scenes that did not require a lot of movement due to health problems. Starting with The Last Jedi, Chewbacca was played by Joonas Suotamo (although Mayhew was still credited as a consultant).

Mayhew's other roles included a bit part as a mechanic in the 1978 film Terror and a sinister figure in the neo-noir Yesterday Was a Lie. His last non-Star Wars film was 2011's Killer Ink (in which his voice was dubbed).

His death from a heart attack in April 2019 was mourned by Star Wars fans around the world, and he was remembered by his co-star Mark Hamill as "a big man with an even bigger heart".