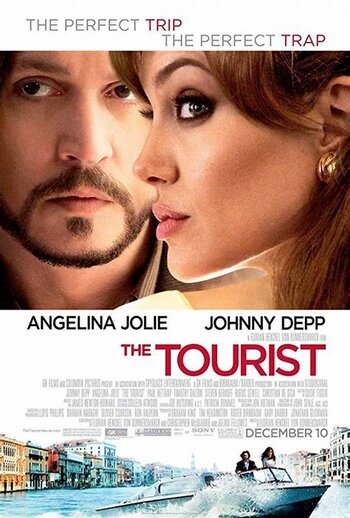 A 2010 movie with Angelina Jolie and Johnny Depp in the main roles.
Advertisement:

The film opens with Elise (Jolie), a beautiful Londoner in Paris, taking in her breakfast at her usual bistro while a van filled with policemen observe her. There she receives a mysterious letter telling her to take a specific train and introduce herself to a random man of the same height and build as one Alexander Pearce. Though the police, led by the extremely driven Inspector John Acheson (Paul Bettany) attempt to follow, she loses them en route to the Gare de Lyon and boards her intended train. There she meets math teacher Frank Tupelo (Depp), a tourist from Wisconsin who is fond of spy novels and nervous around his new acquaintance. He thinks he's met the girl of his dreams, and what turns into light flirtation on the train holds the potential for so much more as Elise invites him back to her hotel in Venice.

Just when Frank begins to think his luck couldn't get any better, a slew of foreign thugs descend upon him. Suddenly, he finds himself hunted by mobsters, crooked cops, and Scotland Yard's finance division as everyone seems eager to track down criminal mastermind Alexander Pearce. Unfortunately for Frank, their current suspect is him.