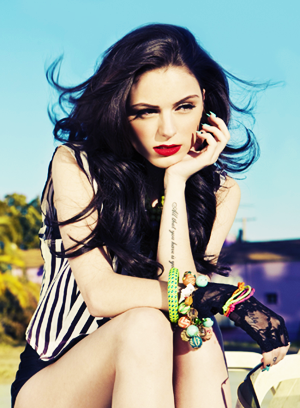 Cher Lloyd (born July 28, 1993) is an English singer who came fourth in the UK's The X Factor back in 2010. Like fellow finalists from her season One Direction, Rebecca Ferguson and Aiden Grimshaw, she has achieved great success following her series, despite not actually winning the show.

Like other modern popstars such as Kesha and Nicki Minaj, Lloyd often combines singing with rapping in her music. She's also known for her urban-styled image, with partially-shaved hair, loads of makeup and ripped clothes.

She garnered some controversy with her debut single "Swagger Jagger" due to it "coming across like a sink estate answer to The Black Eyed Peas" and its questionable sampling of "Oh My Darling Clementine". Despite its negative reception, the single debuted at number one on the UK singles chart and number two on the Irish charts. The song's success paved the way for two more successful singles, the Mike Posner-assisted "With Ur Love" and the international hit "Want U Back". This lead to her debut album Sticks + Stones charting at number four on the UK albums chart, and number nine on the US albums chart.

In 2013, she married her boyfriend of two years, Craig Monk.